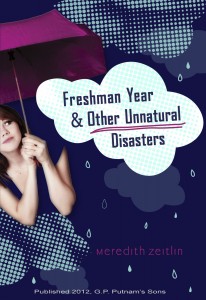 Kelsey Finkelstein is 14 and frustrated. She tries to live up to her awesome potential, but her plans are always foiled – by her impossible parents, her annoying little sister, and life in general. But she’s certain that high school will change everything. Enlisting the help of her friends, Kelsey gets ready to make the kind of mark she knows is her destiny.

Things start out great – her arch-nemesis has moved away, giving Kelsey the perfect opportunity to shine on the soccer team and finally catch the eye of her crush. But soon enough, an evil junior’s thirst for revenge, a humiliating run-in with a mysterious photographer, and a series of other catastrophes make it clear that just because Kelsey has a plan for greatness… it doesn’t mean the rest of the world is in on it.

Kelsey’s witty commentary and sardonic narration will make you laugh out loud – while being thankful that you’re not in her shoes, of course! 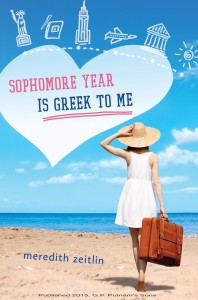 High school sophomore Zona Lowell has lived in New York City her whole life, happily hanging out with her two best friends and planning to follow in the footsteps of her renowned-journalist father, David. But when he announces they’re moving to Athens for the remainder of the school year so he can work on an important new story, she’s devastated— he must have an ulterior motive. See, when Zona’s mother married an American, her huge Greek family cut off contact. But Zona never knew her mom, and now she’s supposed to uproot her entire life and meet possibly hostile relatives on their turf? Thanks… but no thanks.

In the tradition of Anna and the French Kiss, Zona navigates hilarious escapades, eye-opening revelations, and unexpected reunions in a foreign country—all while documenting the trip through hard-hitting newspaper stories… in which she and her once-in-a-lifetime adventures are the main subject.